#BrownTopMilletBread : I have been enjoying most of the minor millet such as Samai, Kodo, Barnyard, Proso, Foxtail millet since when I started living in Raipur, the capital city of Chhattisgarh.
Since then slowly I started including these millet, buckwheat and Amaranth seeds in my cooking list from the year 2012.
I have been trying different dishes from these millet and shared those recipes here in my posts.


Last year, I had seen a video of speech by Dr Khader Vali about millet. After watching it I came to know about one more millet called #BrowntopMillet [ some call it #AmericanMillet ]. Especially he is recommending to include five millet namely Kodo millet, Little Millet, Barnyard Millet, Foxtail Millet and Browntop Millet in our daily diet because of its medicinal properties. He is also stressing the point that all should take food made from these millet as regular diet to lead a healthy life and tide over modern day diseases.

It has been in use since ancient times. The grains are Brownish yellow in color. It is largely cultivated in Tumakuru, Chikkaballapur and Chitradurga districts of Karnataka and some parts of Tamil Nadu, Andhra and Maharashtra. It grows well in less fertile and dry area with one or two spells of rain.
Unlike other millet it is being cultivated in limited area in India and also dehusking grains is little bit difficult compared to other millet. So it is costlier than other ones. 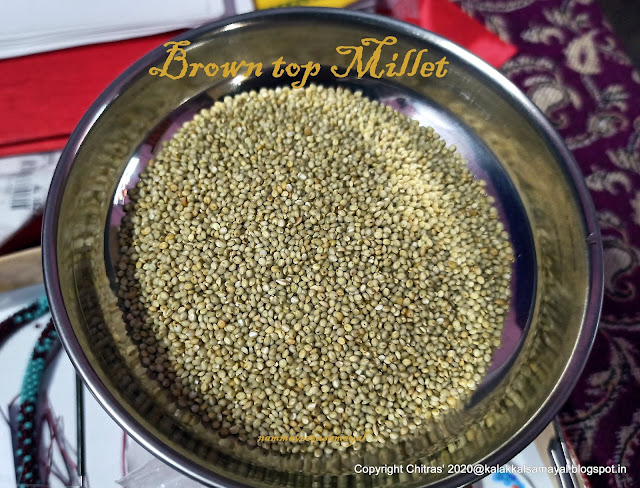 Millet has to be soaked for a minimum of two hours before cooking to reap full medicinal benefit.

As always first I made pongal and the taste was good with nice aroma. Its aroma is different from other millet. So I thought of trying some other interesting recipe with brown top millet. I searched this blog for a suitable recipe using this millet. Then I zeroed in on a rice recipe by name Kallappam and decided to give it a try. I had made it long ago after seeing a shared recipe by a friend. I immediately swung into action and started preparation. It was a great success. Yes My choice is right!! The bread was so tasty and the aroma was great.


So start planning 8 to 10 hours before to get a tasty and aromatic bread. Prepare batter the previous night to make bread for breakfast. If you are planning for dinner then prepare batter in the morning.

Note : Yeast has to be added to the batter to aid fermentation. But the dry yeast which I am having is not active. So I have added fermented sour idli maavu.

Heat on a stove over high flame till a whistle.
Then reduce the flame to SIM and cook for 10 minutes.
Take out cooked brown top millet only after the pressure cooker ran out of steam.
Allow to cool down. 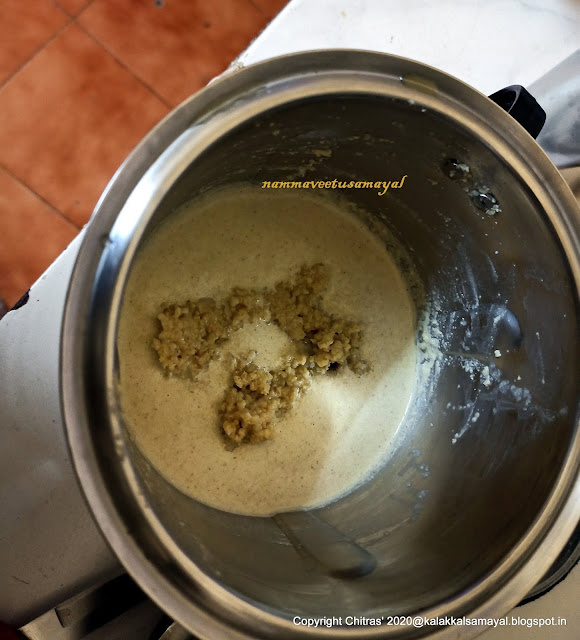 The batter should be of idli maavu consistency.
Transfer into a big vessel.
Add fermented sour idli maavu salt, sugar and mix well.
Keep it closed in a warm place for 6 - 8 hours or the whole night to ferment. 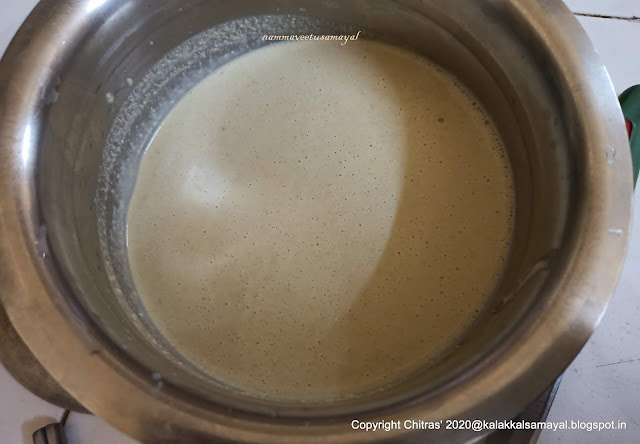 After fermentation the batter would have doubled in volume and looks like this. 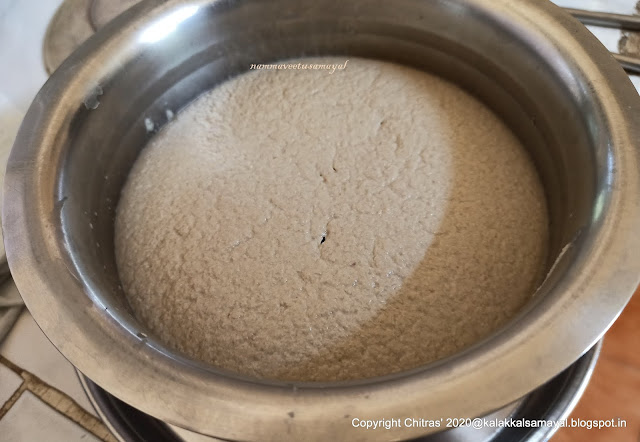 Keep an idli pot on a stove and add 2 cups of water.
Place steamer plate in it to fit into its slot.
Heat on high flame.
Take a deep flat plate and grease it with 1/4 Tsp of oil.
Half fill the greased plate with batter.
Sprinkle nicely chopped raisins over the batter.
Keep it inside the idli pot and close the idli pot.
Steam it for 12 minutes. 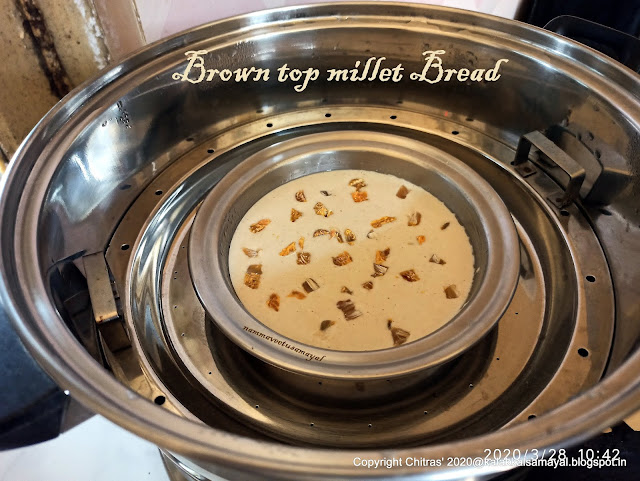 After 12 minutes pierce the bread from the top with a clean knife or stick.
If it comes out clean then the bread is ready.
Take out from the idli pot and keep it on kitchen platform.
Allow to cool down little bit.
No color powder has been added but appears in its natural light chocolaty brown color.
Brush with ghee over the surface of the bread to avoid drying up. 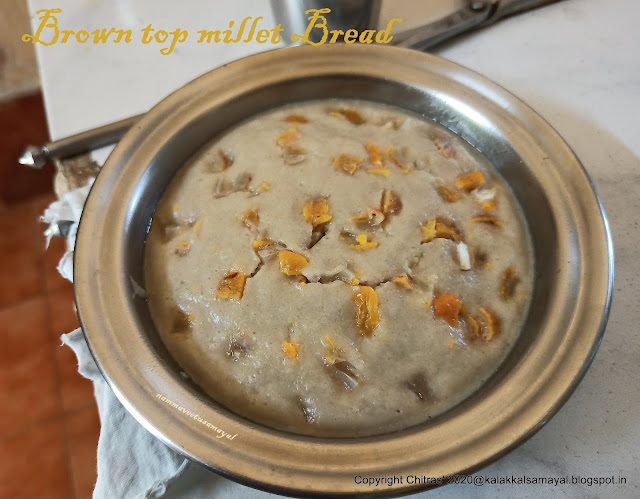 Then slice it with a clean &dry knife.
Its very soft and taste like a real bread.

Enjoy with any spicy tomato chutney. 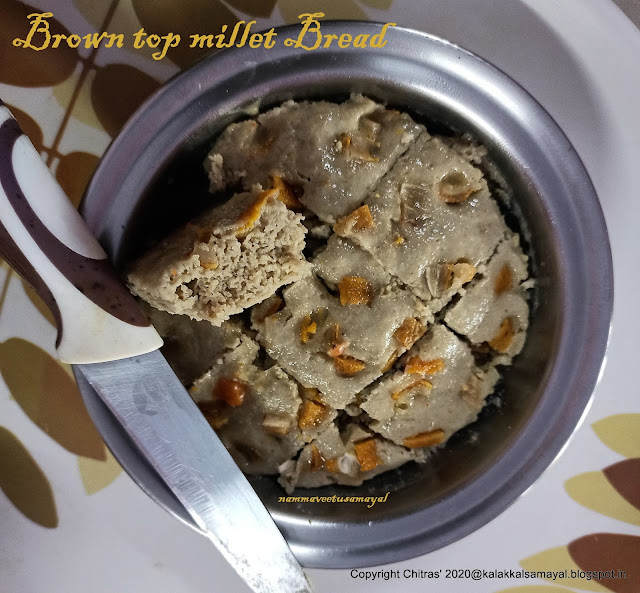 For other Appam Recipes

Posted by Chitra Raveendran at 2:13 PM

Side dish for tiffin